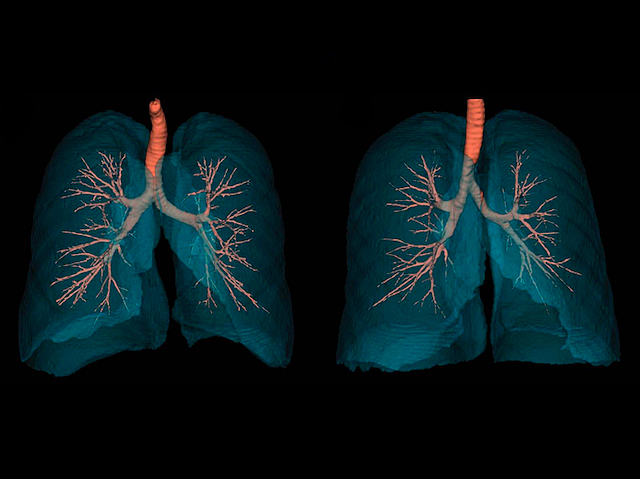 Women have narrower airways and with thinner walls

Strongly associated with smoking and pollution, chronic obstructive pulmonary disease (COPD) causes serious breathing difficulties, linked to changes in the airways of the lungs. The third leading cause of death worldwide, COPD has historically been more prevalent in men, but this is likely due to higher rates of smoking. In fact, recent work suggests women may be at greater risk, in part because of their inherently smaller airways. Examining lung CT scans (pictured, for a representative non-smoking male, left, and female, right) from nearly 10000 volunteers, both smokers and non-smokers, revealed that women have narrower airways, with thinner walls, even when accounting for body size. Changes in airway properties, such as the same degree of narrowing, thus have worse impacts on breathing capability and survival in women than men. As in other areas of medicine, growing consideration of the specifics of women’s bodies should lead to better prevention and treatment.