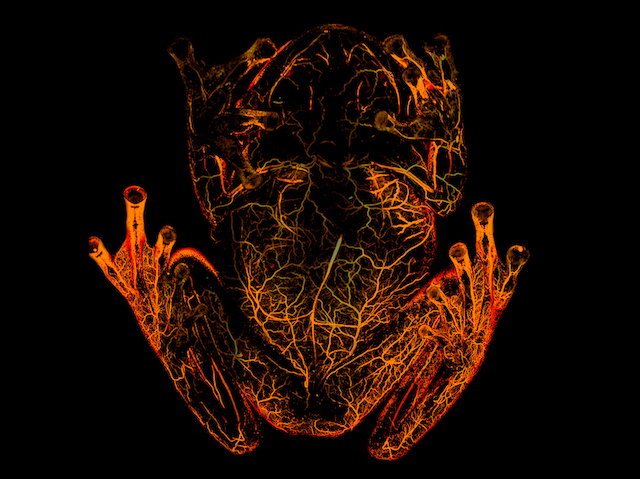 Clinging beneath leaves in the forests of South Mexico, glass frogs (Hyalinobatrachium fleischmanni) sleep soundly, hiding from predators with a clever trick – they’re almost completely transparent – but how? Here researchers use photoacoustic microscopy (PAM), a gentle technique where energy absorbed by tissues becomes sound that can be converted into pictures. While anaesthesia leaves the frog’s circulatory system visible (with blood cells deeper in the tissues shown in deeper shades of orange and red), PAM allowed the team to image naturally sleeping frogs, finding their blood cells had 'disappeared'. The team find the frog can 'hide' around 89% of its red blood cells in the liver – a feat of haemodynamics that would lead to massive clotting in other animals. Studying this process sheds new light on froggy camouflage but may also provide clues and strategies to human clotting disorders.