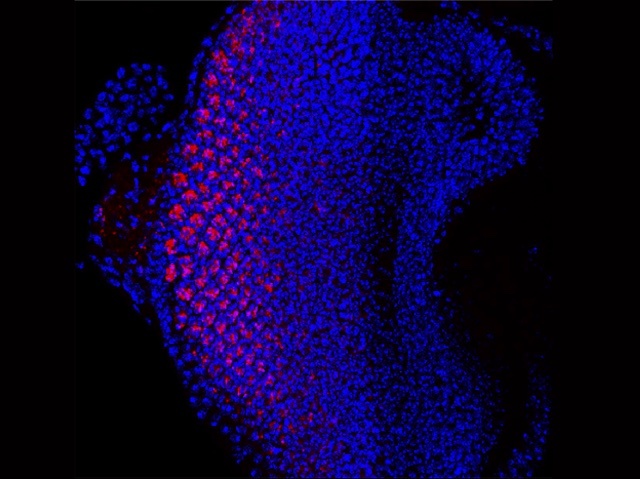 Fruit flies (Drosophila melanogaster) share many of our genes, making them useful model organisms – scientists often draw lines between clues in the fly and human tissues. Here they study a bed of neurons in a fly’s retina (with its cells highlighted in blue). They modify the cells to make higher levels of a protein called Tom40 (red) and watch what happens next. In humans, a similar Tom protein is associated with Alzheimer’s disease, but the link – the mechanism – is clouded by the activity of other genes and proteins. The simpler genetics of Drosophila provide a clearer picture – too much Tom destroys neurons by upsetting processes in the cells’ mitochondria, so much so that the cell triggers a form of self-destruct called apoptosis. The next step is examining the link between apoptosis and Alzheimer’s disease in human neurons with a view to developing therapies to keep Tom in check.